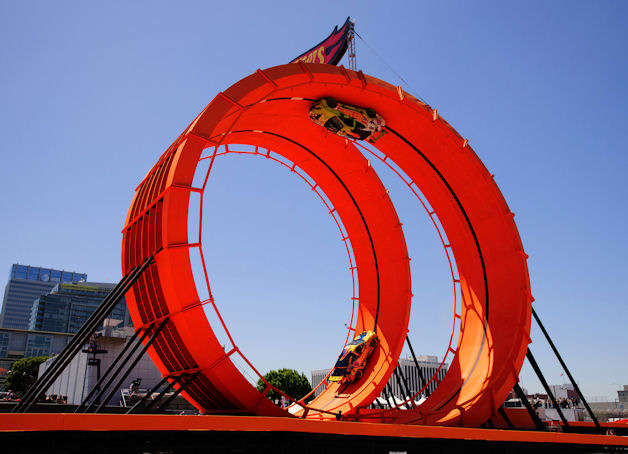 Like many of you petrol heads out there, I spent many an hour constructing my own Hot Wheels and Matchbox toy car tracks to perform some epic wall and floor gauging stunts. Most of these resulted in a mini carnage that only put my parents newly decorated walls in danger.

With the introduction of the X Games it was only a matter of time until Team Hot Wheels pulled off what many of us only thought was possible in 1:64 scale. The double dare loop was performed at this years x Games in LA with Drift champion Tanner Foust and Stuntman Greg Tracy piloting the tricked up cars though the loops.

Both cars fully completed the stunt hitting a top speed of 52 miles and while pulling of a stomach churning 7G on the 66ft loops. The stunt put the drivers into the Guiness Book of Records.

After the successfully pulling off the stunt, Gretg Tracy Said. “That was unbelievable, I tell you what, I’m at a loss for words. That was absolutely the coolest thing I’ve ever done. It was a handful trying to land it and get it slowed down. I knew Tanner was right behind me and I was just hoping we weren’t going to tangle before we got to the end.”