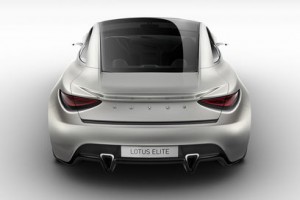 The new Lotus Elite... with a back end better than your mum's!

British sports car firm, Lotus, have revealed a brand spanking new machine to help raise it’s profile. The new Elite is a 2+2 coupe GT poised to take on the Aston Martin DB9 & Ferrari California. The new Elite is expected to retail around £115k but as usual with cars like these I expect it may be slightly more when released.The new Elite weighs in at around 1650kg which is a change in direction for Lotus who are well known for producing small lightweight sports cars.

Power is provided by a supercharged 5 litre V8 which evolved from the Lexus IS-F sports beast. The powerplant will rev to 8500rpm and produce 612bhp and 531lb ft of torque which will propel it from standstill to 62mph in 3.5 seconds. Lotus will also be using F1 derived technology in the form of KERS (Kinetic Energy Recovery System).
Styling is very Ferrari like with some Japanese influences (Honda S2000 anyone?). But just like any new car due out, subtle changes may be made before the release date. The Lotus Elite is expected to be shown at the Paris Motor Show next week, so expect more information on this beast then.