US to get the Audi TT RS thanks to Facebook campaign… 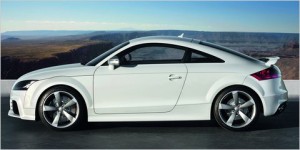 Audi has announced that the 360-horsepower Audi TT RS sports coupe will soon be available in the United States. The car was introduced at the 2009 Geneva Auto Show and has been available in Europe and other markets since 2009.

“With performance and agility rooted in Audi motorsports success, the TT RS is truly an emotional sports car,” said Audi of America’s president, Johan de Nysschen. “That emotion became abundantly clear as we explored interest across the country.”

While Europe gets roadster and coupe versions of the TT RS, American customers will have to settle for just the coupe version. That coupe, however, will come with the 2.5-liter TFSI 5-cylinder engine that reportedly makes the car capable of going from zero to 60 m.p.h. in just 4.6 seconds. The engine will deliver power through a 6-speed manual transmission and Audi’s Quattro all-wheel drive system.

With 360 horsepower and 332 pound-feet of torque, the TT RS is considerably more potent than the original Audi TT, which was introduced in 1998 with a mere 222 horsepower and a 4-cylinder engine.

The TT underwent a complete redesign for the 2006 model year. The most powerful Audi TT model currently available in the United States is the TTS Coupe with a 265-horsepower turbocharged 4-cylinder engine. That car sells for $48,350, including destination and dealer prep charges.

Audi said that standard and optional features for the United States version of the TT RS were still being determined. A report on the automaker’s Facebook fan page says that the number of vehicles available to American buyers will be “extremely limited.” The car is expected to be available in the third quarter of 2011. Pricing has not been announced.