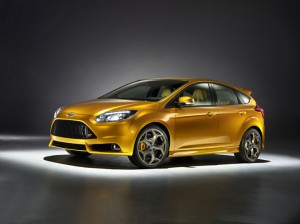 Powered by a 247bhp 2.0-litre Ecoboost engine, the performance version of the all-new Ford Focus will be on sale in the UK late 2011 or early 2012.

Performance details have yet to be released, but it should prove faster than the existing 221bhp car, which sprints from 0-62mph in 6.8 seconds.

The three dials inset on top of the dash are carried over from the previous-generation ST, showing information such as turbo and oil pressure.

The multi-media display on the dash shows the car will have wireless internet connectivity at least an an option, while it looks like blind-spot assist will be available, too, as there is a blind-spot icon in the door mirrors.

The Focus ST will be on sale in the UK at roughly the same time as a new key rival, the Vauxhall Astra VXR. The Astra VXR is based on the Vauxhall GTC (also being revealed at the Paris show) and is tipped to have around 300bhp.

Ford will also show off its complete new Focus range at the Paris show, with the hatch, estate and saloon versions being shown together in Europe for the first time. The Focus range goes on sale in the UK next March.

Also being shown off in Paris will be the new C-Max and Grand C-Max, as well as a C-Max PHEV (Plug-in Electric Hybrid Vehicle) which will go on sale in 2013.