Autocar puts the 911, Merc SLS, Lexus LFA and GTR in a head to head battle 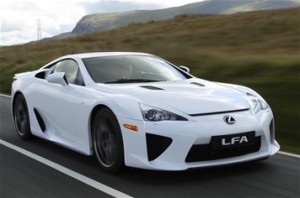 The Lexus LFA, what a mighty fine sight!

Its not exactally got the production values of Top Gear but just listen to some of these automotive materpieces rattle down the run way.

Which of the various mega-horsepower supercars is the fastest of all? We pit the Mercedes SLS against the Lexus LFA and the Nissan GT-R against the Porsche 911 Turbo S to see which car can claim that title. But to claim the crown, the winners of the two head-to-heads will also have to beat a special challenger from Britain… Jamie Corstorphine is your referee.